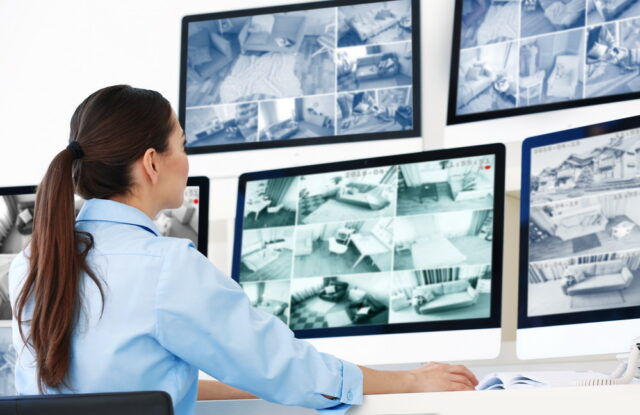 Video cameras are just about everywhere you look these days. Take a trip to the grocery store and your vehicle is likely to be monitored by video surveillance at some point during your trip. At the store, video cameras will keep an eye on you as you make your way from the parking lot to the building. More cameras will follow you around while you do your shopping. Is all of this good or bad?

The video surveillance coin has two sides. One side is good, the other bad. The hard part is figuring out which side is more important. Strong cases can be made for both.

Video surveillance has become so prevalent that we can no longer avoid discussions that might be critical of it. So much video surveillance smacks of an Orwellian world we only dreamed of 50 years ago. But that world is now here – or at least the capabilities to create that world are. Therefore, we now need to have those uncomfortable conversations about video surveillance.

A few years back, Amazon raised heads with a program involving its Ring video doorbell. Amazon was ostensibly working with local police departments in hopes of establishing local networks of video surveillance cameras police could use to help solve crimes. Some of the participating departments even received free cameras in exchange for agreeing to distribute them to local residents.

For Amazon, the program was an ideal way to get its video doorbells in to consumer hands. Local police departments jumped on board for the surveillance and PR benefits. Yet despite a strong collaborative effort between the two, there was plenty of outrage among those concerned with privacy.

Amazon is not the only company to have launched a video surveillance network built on privately installed cameras. And Atlanta based company known as Flock has done the same thing. In fact, their program maybe even more invasivethan Amazon’s.

A 2021 report from Threat Post says that the company was already working with more than five hundred police departments in some 1,000 cities as of April that year. Flock cameras are especially attractive to local police because they are equipped with automated license plate recognition (ALPR) technology. The company insists that their technology helps local police departments solve non-violent crimes.

The positive side of the video surveillance coin is found in deterrents and crime solving. There is little doubt that certain security measures deter crime. Vivint, like so many other home security companies, cites data on its website showing that criminals prefer targets that are not protected by security systems. The data shows that criminals are not all that fond of video surveillance.

When crimes do occur, every bit of evidence police can get their hands on helps. Video evidence is often key to solving certain types of crimes. It is useful as an investigative tool and, where allowed by law, a prosecutorial tool as well.

That being said, critics of the Flock program insist that there is no evidence suggesting that ALPR-equipped cameras either reduce non-violent crimes or assist police in solving such crimes. So it boils down to who you believe. The other thing to consider is this: burglars can easily tell whether they are being surveilled by video cameras. Do criminals consciously recognize that their cars are being surveilled as they drive down the street?

Video feeds themselves are rather innocuous. They become problematic when people use them for unintended purposes. In addition, technological advancements are giving video cameras and the software that controls them unprecedented capabilities.

This post has already discussed ALPR, a technology that allows cameras and software too correctly read and analyze license plate numbers. Plate numbers can be retrieved at a significant distance and at speeds of up to seventy-five mph. In theory, a full network of video cameras could track your every move as you drive around town. But then again, the GPS capabilities built into your smartphone already do the same thing.

Another alarming technology is face recognition. Sophisticated cameras and software can capture, analyze, and identify faces. In some countries, the technology is already being used to track suspected criminals. Government officials say it is all in the best interests of citizens, but can we really be sure? Video cameras and software do not define who gets tracked and for what purposes. People do that. And if they can track criminals, they can track anyone.

The Cost of Security

Following the tragic events of September 11, 2001, the U.S. doubled down on security. More than twenty years later, just getting on a plane requires a monumental effort forcing us to be at the airport some three hours before departure.

The same holds true for gaining entry into public schools, tourist attractions, museums, and so on. Compared to what society was like at the turn of the 20th century, we are virtual prisoners in our own country two decades into the 21st century. But are we any safer?

Security measures can only go so far. As for video surveillance, it definitely has its good points. But how much is too much? At what point does the bad side of the coin turn up more often than the good side? It is something to think about.

Can The Bad Weather Affect The Liability In A Car Accident?